Garena Free Fire x BTS: Garena Free Fire is a battle royale multiplayer online game that has a worldwide player base. The publisher of this game Garena always wants to give its users a different experience that can be in the form of game updates or in-game events and collaborations which bring so many themed in-game items.

Garena has already done plenty of collaborations with big celebrities, DJs like Alok, sportsmen like Cristiano Ronaldo (CR7), web series like Money Heist, etc. Now we can see an upcoming collaboration within a week with one of the most popular series or say game Assassin’s Creed. These were collaborations till now (OB32 update). But Garena teases an upcoming mega collaboration with a worldwide popular band BTS in the next OB33.

Though the post was first published by North American social media handles, the collaboration will be for all the servers of Garena Free Fire. The game is currently banned in India. So, it is not sure it will come to normal Free Fire but be sure about Free Fire Max. Because it is still available on the Play store and the Indian server is still open.

The FF x BTS collaboration is expected to be in late April or early May during the Free Fire World Series 2022 period. Why I am saying this is because every time Garena does something bigger and exciting during the World series. So, you can see the hype of Free Fire and BTS collaboration being created among the players from mid-April.

Also, it is confirmed that the collaboration will be in the OB33 patch update which will be around March 23 or 24. This can help you to estimate the date even better.

BTS also known as Bangtan Boys, is a South Korean Kpop boy band. BTS stands for Beyond The Scene in English. They are a group of seven members, 3 are rappers and 4 are vocalists. According to Wikipedia, they have won 445 awards out of 641 nominations. This shows what they’ve achieved. They have 60 Million + followers on Instagram on the name of BTS. You can now imagine the fan following BTS get. 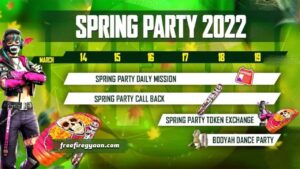 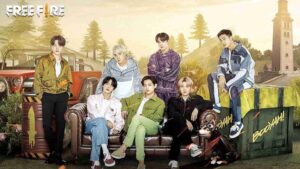